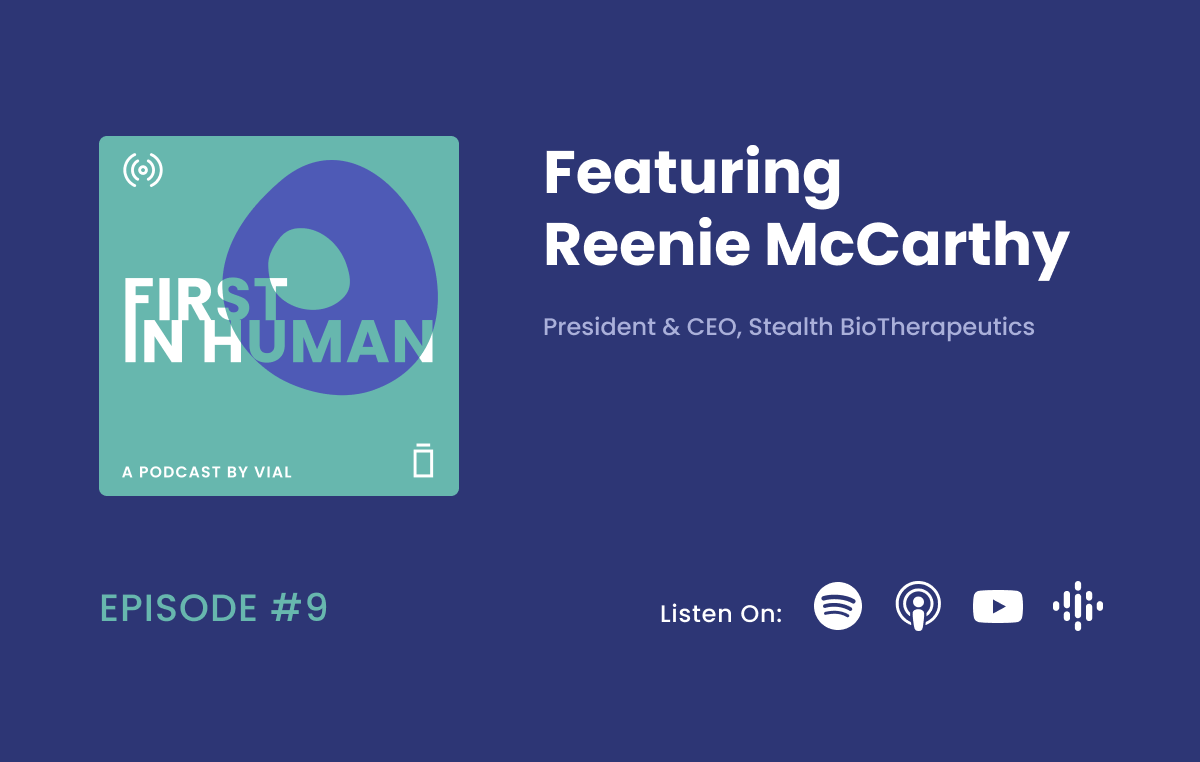 For episode 9, we connect with Reenie McCarthy, President & CEO of Stealth BioTherapeutics.  Find out where there’s room for inefficiencies to be fixed by tech as it pertains to objective and subjective endpoints. First In Human is a biotech podcast that interviews industry leaders and investors to learn about their journey to in-human clinical trials. Presented by Vial, a tech-enabled CRO, hosted by Simon Burns, CEO & Co-Founder. Episodes launch weekly on Tuesdays.

Simon Burns: Reenie, thank you for joining us on First in Human.

Reenie McCarthy: Thank you for having me.

Simon Burns: Give us a quick introduction and background on yourself and then let’s jump into what brought you to join Stealth.

Reenie McCarthy: Yeah, so I worked in private ve- investment on the both venture capital and private equity side of the aisle for over 25 years. I was with a group called Morningside Ventures, which is Boston- based but invests globally, primarily in early stage life sciences, although also in tech. And, Stealth was actually a portfolio company of Morningside’s and I had been on the board of it and was very interested in the technology. When we decided to really bring the company from virtual mode to drive proof of concept clinically across several therapeutic areas, I jumped in to lead the team. It was supposed to be on an interim basis, but things clicked and so here I am 10-plus years later.

Simon Burns: Wow. Walk us through building a culture as an operative, as an executive. I would imagine that’s maybe a unique challenge you stepped into. How have you thought about building culture at Stealth?

Reenie McCarthy: Yeah, so, I mean, culture’s an interesting thing, right? Because I think it’s one of the things that makes work fun to come into; to the extent work can be fun. And it helps to build the team that’s going to be committed and stick together and have enthusiasm about our programs.

So we focus, in many cases, on rare diseases and so clearly putting the patients first at the forefront of our company culture is really important. But then even beyond that, just, I think building a culture of transparency. We are not particularly hierarchical although I think a lot of people in biotech are coming out of pharma companies which are. But, we try to break down some of those barriers and we definitely try to promote and grow from within and broadly include people on the team so that there’s a lot of momentum and learning opportunities for people to keep work fun.

So I think we work pretty hard at that and, again, making sure that our teams are structured in a cross-functional manner so that, again, most people in the company are aligned with our mission and what we’re doing to execute on that.

Simon Burns: You guys have been quite successful in being a clinical stage biotech company. A lot of younger biotech founders would look to you and, I’m sure, have a lot of questions and advice. What advice would you have for those first time or younger biotech teams?

Reenie McCarthy: Yeah, I think you have to be careful to prioritize your objectives, so, right, setting goals that are achievable with the resources you have. And also really kicking the tires, right? On do those goals make sense, not just to the company but more broadly to patients and to KOLs within the therapeutic areas. I think that it’s important to have a commercial viewpoint really even as you go into pre-clinicals so you can develop the right target product profile and, again, just map out some of the challenges that you may face as you progress through discovery into the clinic and then hopefully eventually to commercialization because you need to have that strategic viewpoint from the outside, I think, in order to put your assets to the best purposes.

Reenie McCarthy: Yeah, so I would actually say technology’s important not just with respect to objective endpoints, although I can talk a lot about those but even with subjective endpoints. When you’re talking about things like patient-reported outcomes, right? If patients can record some of these on devices instead of paper it really makes collection of that type of data much more accessible and hopefully reliable, because you’re collecting it more frequently.

But, certainly for objective endpoints, there are wearables that can be used. I think we’re a bit away from being able to interpret measurements of patients’ daily exercise, for example, but it’s interesting to understand that in the context of clinical trials, looking at skeletal muscle endpoints. And certainly for diseases where you want a more reliable biological signal looking at EKGs or electrocardiograms or MRIs or OCT scans in the case of the retina, really ground any subjective findings you might have or effort-dependent findings in a real biological signal which I think can amplify the power and also, frankly, aid in clinical trial design, right? Because you have something that [00:05:00] is less variable and that will help you design your next trial.

Simon Burns: Cannot agree more on the shift from paper to digital. Yeah, why not data validate in real time? You’re a unique company. You span therapeutic areas. You also scan kind of indication prevalence. You just work in “ultra-rare.” What are the nuances you’ve seen across therapeutic areas and across the rarity of diseases?

Reenie McCarthy: When you’re dealing with an ultra-rare disease, and we are late stage in a clinical program in a disease that is incredibly rare called Barth Syndrome. It affects less than 150 Americans, less than 300 in the world, every patient counts, every data point counts. And, frankly, being able to access things like natural history controls becomes very important. And, again better entry and collection and maintenance of data. I would say not even as you’re conducting your own clinical trials, but as you’re getting into the clinical trials to really assess the natural history and whether you might be able to utilize natural history controls and really vet that from a data integrity perspective becomes really important.

It’s also challenging in that setting. We’re hopefully moving towards an accelerated approval pathway, and with that needing to design a global conformatory trial. Again, if that’s all successful, identifying sites globally, again, with such an ultra rare patient population and making sure that there’s consistency of data collection across those sites is going to be crucial.

Switch from that to a disease like geographic atrophy, right? Which affects millions of Americans. And there, I mean, I think there are also challenges making sure that sites are consistently collecting data and marshaling it the way you want to. It’s not probably as much of a challenge to identify sites and patients but it still becomes really important that you run a good, tight clinical trial and that you marshal your data resources properly.

Simon Burns: While, we’re there, can we briefly talk about G8? Two approvals, Apellis and Iveric. Really exciting times patients for the field in general. What’s your reaction and what do you think the next six to 12 months will show as these products hit the market?

Reenie McCarthy: So, I think it’s great to see Plavix potentially being approved for this disease. It’s a terrible disease of progressive blindness. It brings a huge toll on patients in terms of loss of independence and quality of living. I think that what we’ve seen with the complement approaches, and I applaud both of those companies for, again, just pioneering in this space, is that they’re reducing the progression of geographic atrophy, right? Which is essentially scarring or cell death in the retina. What we aren’t really seeing there and, so, hopefully new approaches might start to reach back earlier in the disease trajectory, to hopefully preserve or improve vision for patients.

So, I do think that targeting geographic atrophy, you’re certainly taking down the inflammatory cascade that’s driving pathological changes in the retina. I think that hopefully we can add on to that approach with other therapies. We’re targeting mitochondria. We have seen improvement in vision with our approach. So I think hopefully you can start to add on to those therapies to address different targets in that disease which is a very complex disease.

Reenie McCarthy: Yeah, so I think that we’ve been incredibly lucky because we’ve had longterm support from Morningside and we actually recently completed a going private transaction because NASDAQ has been incredibly challenging. And so for us, being back in the private market, gives us the ability to execute on some pretty significant milestones that we anticipate reaching over the next 18 to 24 months.

I think for companies that are struggling in this market, you focus on what the most immediate near-term goals are going to be. Marshal your assets towards reaching those goals. There is a lot that, can be done in terms of building the pipeline for the future with essentially sweat equity without spending a lot. And, so putting your assets towards those later stage programs which are going to drive more near term value creation and try to hold the course on the others with a little more ingenuity internally but not a lot of spend, I think is pretty important.

I mean, this will pass. We go through cycles in biotech. I’ve been investing in biotech with Morningside since 1993, so we’ve seen these cycles before. Good companies hopefully will come through and, I think just keeping that in mind and getting through these times as best as possible will be important.

Simon Burns: Well, with that, thank you so much. Really appreciate the time today.

Reenie McCarthy: Yeah, it was great talking to you. Thanks for the time.